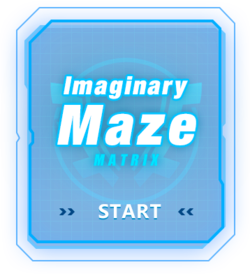 The Imaginary Maze is a special event that replaces the original Matrix in Armadas. Instead of exploration being featured during battle, it is moved to outside battle in a simplified interface that features the same chibi characters used in dorms. This interface introduces various new features and moves many features from the old Matrix to the new interface as well.

Before entering the Matrix, at least one (of four) team of Valkyries is required.

Exploration in the Imaginary Maze is very similar to top-down view dungeon crawlers or strategy RPGs. Each floor has a grid-like structure with various events or enemies laid out and obstacles that must be maneuvered around to reach the next floor.

Unlike the old Matrix that relied on fuel to allow exploration, the Imaginary Maze uses Exploration Power. While each new floor required one fuel in the old Matrix, the Maze uses 1 Exploration Power every time a Valkyrie steps on a new tile of the grid. This means, of course, that the most efficient method to traverse the Maze is to avoid stepping on as many unnecessary tiles as possible. If Exploration Power is depleted, it can be replenished by using stamina at a rate of 4 power per 1 point of stamina for up to 200 additional power per week.

Each floor has a set number of enemies listed under the floor name. Fighting an enemy will cost every Valkyrie on the team that takes part in the battle some of their Fatigue. If a Valkyrie does not have enough Fatigue to enter battle, they will not be able to participate and be required to switch out or have their Fatigue replenished by using items like the Small Fatigue Pack.

Each battle has a time limit, so Captains may want to make sure they are prepared before going into the more difficult floors and battles. Additionally, Captains will have the option to use one buff item from their inventory before beginning battle. Also unlike in the old Matrix, Valkyries have the ability to heal in battle. Their HP and SP values also reset for every new battle. This means each battle starts from a clean slate regardless of how the Valkyries do in the previous battles or whether they were defeated.

Enemies will become increasingly difficult depending on what floor and how deep into the Maze the Valkyries have traveled. To assist Valkyries in the increasingly harsh battles, every enemy defeated will drop a random buff from within a list which will be listed later on this page. These buffs can stack and range from a variety of very useful effects, allowing Valkyries to deal considerably higher amounts of damage than they normally would be able to or have access to other effects they normally would not.

Other drops from battle include Honkai Energy which is used to buy various buffs from the HOMU Shop which is explained in the next section, Ranger Reputation, and a variety of useful items.

Different obstacles found in the Maze.

There are also various events or objects found in the Maze.