Similar to other region's servers, Global also has a Character Interaction System on the bridge.

From Global launch we've had the option to change which Valkyrie is displayed on the bridge by tapping on the speech bubble next to the displayed character, selecting Edit (as shown in the screenshot below), and then selecting the preferred Battlesuit and tapping Edit in the lower right. 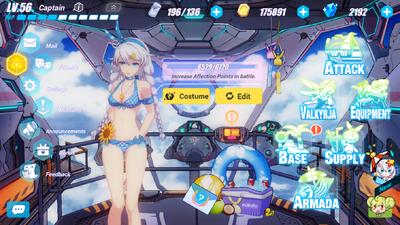 After tapping on the speech bubble, the Edit option is displayed to change the displayed Battlesuit.


Notably, the touch system available in other server versions as well as the possible temporary stats bonuses are disabled in the Global version.

A Battlesuit's affection will increase while the game is open, and is currently capped at 4 hearts (levels).