Raiden Mei is a Valkyrie in Honkai Impact 3rd. The daughter of the prominant Raiden Ryoma, she has beautiful and demure looks. This, combined with her mastery of Bushido and Itto-ryo, make her a true incarnation of silk hiding steel. She attends St. Freya Academy alongside Kiana and Bronya. She normally does not use the tremendous power within her... except when dire circumstances bring it forth.

Mei is most easily recognized by her thigh-length black hair (depicted as indigo in game/artwork). She keeps half of it tied up in a ponytail and decorates it with pins or other ornaments. She is also the tallest of the Valkyries, standing several centimeters taller than even her instructor and superior captain, Murata Himeko. Due to her many years practicing and teaching swordsmanship, she has a toned build.

Perhaps in spite of the distance she received from others due to her position and powers, Mei is kind and caring. She is also an excellent student who studies diligently on her own as well as helping her classmates prepare. Her cooking skills are excellent as well, many fights have broken out over who gets a slice of her delicious cakes.

Her given name is made up of the kanji for "bud/sprout" and "clothing", while her surname means "lightning".

In contrast to to Mei's kind and caring nature, the 3rd Herrscher is haughty and somewhat arrogant. She looks down on normal humans and, like other Herrschers, has an instinctive hatred towards them and the world. In addition, despite her having Mei's memories, she firmly rejects them, claiming they are not her own, and has shown a personal disdain towards her, viewing her as being weak due to her kind nature.

Despite initial appearances, however, the 3rd Herrscher also a somewhat lonely side to her as a result of never being able to interact with others. Because of this, she grew interested in Kiana as she was the only one who could approach her, declaring only she has the right to kill her. In reality though, the 3rd Herrscher had plenty of opportunities to kill her but chose not to and she seems to actually enjoy her company but is too proud to admit it, making her somewhat of a tsundere. Over time, she also seems to have become more accepting of Mei.

Mei's father, Raiden Ryoma, was a young leader in the science and technology field. Taking over as president of ME Corp (lit. Massive Electric Corp) at the age of 30, he transformed the company from a commercial electrical appliance manufacturer into a smart electronic company that would hold the world's most valuable technology secrets for more than a decade, with one out of every ten electronic devices in the world being equipped with electronic chips produced by them. Raiden Ryoma became a representative of Japan's domestic technological innovation and business thinking revolution and was sought after by countless young people. However, based on unpublished statistical data, ME Corp was also the world's largest arms provider and had hidden dealings with many major countries, secretly developing the next generation of combat weapons. Therefore, although not publicly involved in the trade, Raiden Ryoma did have a small impact there.

As the daughter of the ME president, Mei lived a lavish lifestyle and formed a noble temperament with graceful elegance and maturity under the strict education of her father. Ever since primary school, she has had an outstanding performance and was widely popular among students, with her beauty and cool temperament earning her the nickname "Queen of Thunder". During middle school, due to ME Corp establishing a high-level research institute in School City, Mei moved there with her family there and transferred to Senba Highschool, becoming the most popular student in only one month after enrolling.

However, ME Corp suddenly became involved in an economic fraud case, causing her father to not only be fired from the board of directors due to alleged falsification of financial documents but also suffer a prison sentence (in reality, he was set up by Kukuria). This incident has a great impact on Mei. The classmates who originally surrounded her suddenly started giving her cold stares and even her close friends kept their distance from her. All of this had a great impact on Mei, causing her to become a withdrawn loner.

This continued until she met an underclassman named Kiana Kaslana. While Mei initially tried to keep her distance from her, Kiana continuously approached her and she eventually found herself warming up to her. Kiana even defended her from her classmates who would bully her. This eventually caused Mei's initial warm personality to return.

One day, Mei suddenly awakened as the third Herrscher, ironically titled the "Herrscher of Thunder," and effectively launched the third Honkai War. The honkai energy she produced quickly corrupted everything around her, causing everyone in the school and city to mutate into rampaging zombies. The only one immune was Kiana (due to her secretly being the second Herrscher), who fought the third Herrscher on the school rooftop to return Mei to normal. While Kiana was completely outmatched, the third Herrscher took an interest in her and, in the end, willingly relinquished control back to Mei.

Afterward, Kiana and Mei made their way through the post-apocalyptic city, fighting through hordes of zombies and other monsters created by the honkai energy. On their way, the two met Bronya Zaychik, who had been sent by Kukuria to capture the third Herrscher, but ended up joining the group instead. However, while recuperating, they were attacked by a powerful monster that gravely wounded Kiana, causing Mei to fall into despair and the third Herrscher to once again seize control. After disposing of the monster, though, she was attacked by the Hyperion; a battleship from Schicksal, who were intending to kill her and end the Honkai War. Murata Himeko fought the Herrscher, but was outmatched. It was only when Kiana regained absorbed the third Herrscher's honkai energy that she was stopped and the Honkai War came to an end.

In the aftermath, Mei and Kiana were taken to St. Freya Academy, with Bronya joining later after she was found stowing away on the Hyperion. Mei was locked in a cell where Himeko confronted her and told her that Kiana had fully recovered from her injuries. Relieved, Mei gave Schicksal permission to do whatever they wanted to her, even kill her. However, this disgusted Himeko, who instead proposed to train her to control her power. When Mei counter-argued that her inability to control the third Herrscher made her a threat, Himeko told her that a bomb would be placed on her heart as insurance. Afterward, Mei happily reunited with Kiana and Bronya, and all three transfered to St. Freya Academy. 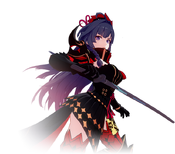 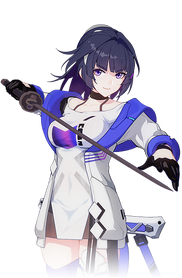 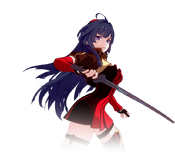 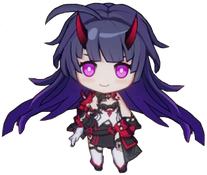