Valkyries are planning an epic stage play for the coming St. Freya Anniversary.

However, though the theme of the play has been set, the key script is still in question.

The girls need your help, Captains!

How to Participate[edit | edit source]

During the Collection, visit the script collection post of the English Facebook page of Honkai Impact 3rd Global and <color=#fedf4c>post your entries as required</color> to participate in this event.

Once upon a time, the princess of the Honkai Kingdom was abducted by the Overlord.

A brave Knight had therefore embarked on a journey to the rescue.

And they lived happily ever after.

※ Entries submitted must be in English. The length of the main text in 【 】 cannot exceed 500 letters (excluding spaces and punctuation).

The script must have these 3 characters: the Princess (Mei), the Overlord (Theresa), and the Knight (Fu Hua).

This event is open to Captains on the Global server only.

Honkai Theater Best Story Award: 1500 extra Crystals besides the Nominee rewards. And the script will be adopted in the Anniversary play in game!

1) After the Collection period, the FB post with the most Likes among all eligible entries will be given the Honkai Theater Most Popular Award.

2) Five posts will be selected from all eligible entries by the Organizer as Honkai Theater Best Story Nominees based on narrative, logic and entertainment value.

3) There will be an open vote on the 5 nominated entries. The post with the most votes will be given the Honkai Theater Best Story Award.

4) The Organizer will randomly select a certain number of Captains from all eligible entries and issue the Honkai Theater Lucky Award. No more than 1 Lucky Award may be available for each UID.

There will be 3 rounds of Honkai Theater Lucky Award:

30 Captains will be selected on February 15 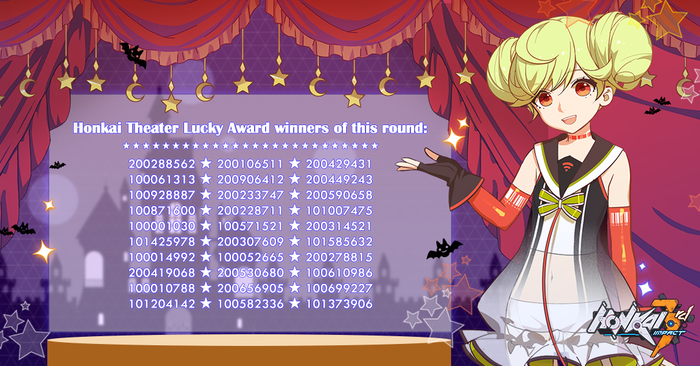 30 Captains will be selected on February 18 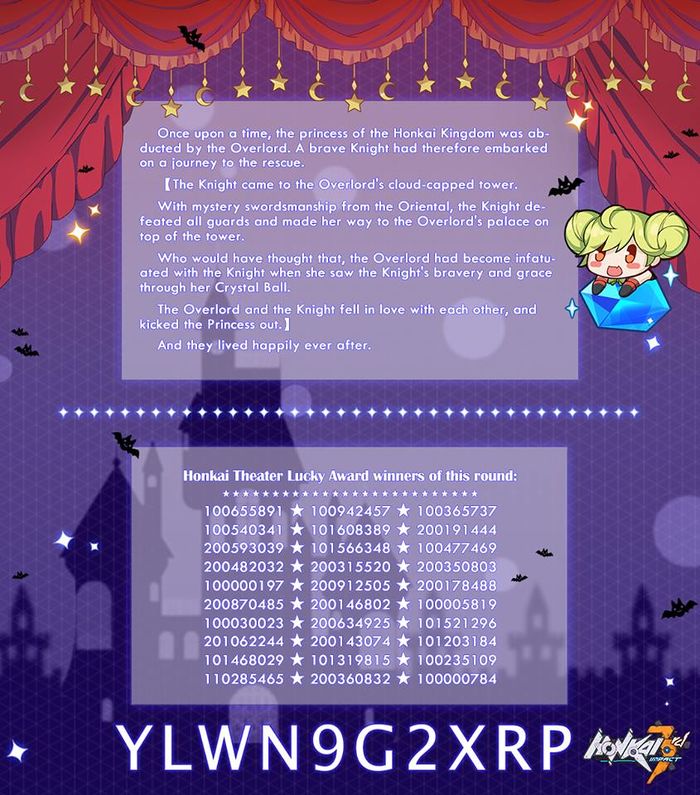 40 Captains will be selected on February 22 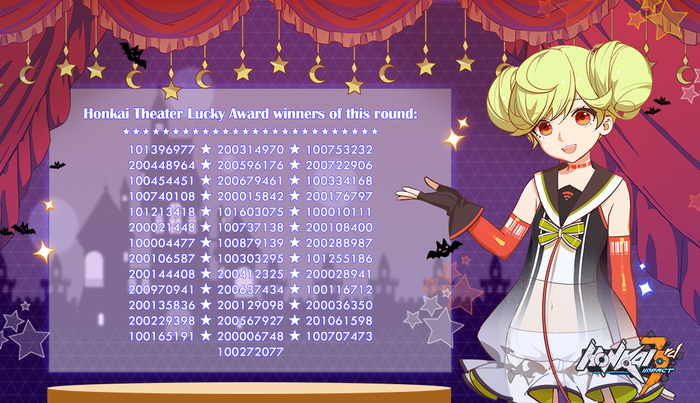 1) Each UID can submit at most 3 eligible entries.

2) Eligible entries must be written in English and must be shorter than 500 letters (excluding spaces and punctuation). Your script will be translated into multiple languages and read by ALL Captains if it wins the Honkai Theater Best Story Award.

4) The rewards will be mailed to Captains in game within 5 working days after the Winners List Announcement. Don't miss it, Captains!~

5) By participating in this event, you agree to grant miHoYo the rights to adapt, revise and use your story.

2) Spam posts and repetitive posts will be deemed invalid.

3) Plagiarism will lead to disqualification.

4) Any speech that offends others, or infringes upon the privacy thereof is not allowed.

5) Vote spamming will lead to disqualification.

miHoYo reserves the right of final decision and interpretation in the case of any dispute of this event.